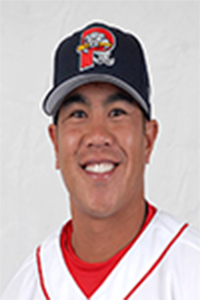 David Bacani is originally from Long Beach California and he attended Los Alamitos High School. As a senior at Los Al, on the football field he was named All-CIF, All-County and was Sunset League Defensive Player of the Year. On the diamond, he was an All-League selection. David went on to play baseball and was a 4-year starter at Cal St Fullerton from 1998-2001. While at Fullerton, he was a 4-time 1st Team All-Big West Conference selection, the only player in Big West Baseball history to accomplish this feat. He was also a 2-time All American and made 2 College World Series appearances, making the All-CWS Team in 2001. David holds school records for the most Hit By Pitches, Runs Scored, and Walks at Cal St Fullerton. In 2002, Baseball America created the “David Bacani Award”, which recognized the best collegiate player in the nation under 5’10”.

In 2001, David was drafted by the New York Mets. He was part of 2 championship teams (Brooklyn Cyclones/St Lucie Mets) and was selected to two All-Star teams while with the Mets. Following the 2005 season, he was selected in the Rule 5 draft by the Boston Red Sox. In 6-seasons in affiliated professional baseball, he won 3 championships and went to the playoffs every season.

Shortly after retiring from professional baseball, David was named Head Baseball Coach for Santa Margarita Catholic High School in 2009 and spent 8 seasons at the helm of the Eagles, compiling 109 wins in that span. In 2014, Santa Margarita won the Division 1 CIF Championship and David was named CIF Coach of the Year. During his time as Head Coach, he helped over 40 players move onto play baseball at the collegiate level.

David currently resides in Mission Viejo, California. He is married to his beautiful wife Jamie and his 3 amazing daughters, Maison 7, Madden 4, and baby Maris who was born in January 2018.