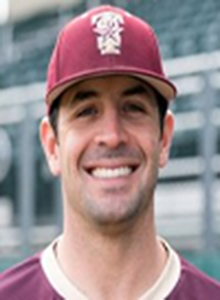 Dominic Ramos grew up learning Texas Hardball and developed into a premier infielder and pitcher at Pflugerville High School, receiving All-District, and All-Centex honors. Dom was awarded a baseball scholarship to Texas State University. There Ramos continued his hard work ethic and became known for his solid defense, command of the zone on the mound, and his ability to compete at the plate. He graduated with a business degree in finance.

Ramos began his professional career with the Boston Red Sox in 2005. After two years with Red Sox, Ramos started his independent baseball career. Ramos spent 8 seasons reinventing himself, reaching his true potential. In 2013, Ramos was named an Atlantic League All-Star and given the honor of “Skeeters Community Man of the Year.”

Ramos sees value in the fast track as well as the road of self-discovery. In the off-season you can find Ramos running around town giving lessons, working with his teams, and helping players and families find solutions to their baseball needs. Ramos has coached at all levels of youth baseball, select high school baseball, and college baseball at Texas State University. His passion is helping young and old players break through areas of the game that hold them back.

None of this would be possible without Dom’s faith in God and the support of his family. He encourages others to find strength in Christ, family, and community as they pursue their dreams.